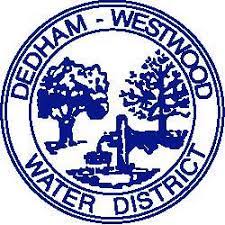 A HISTORY OF THE DEDHAM-WESTWOOD WATER DISTRICT

The Dedham Water Company was founded by an act of incorporation through the Legislature in 1876 recognizing a need for a public water supply for the townspeople of Dedham. According to the First Annual Report, no significant action was taken, however, until 1881 when funds were appropriated to hire an engineer after “the recurrence of successive dry seasons…and the increasing foulness of the wells in Dedham.” The report continues, “That those who have carried forward this undertaking, midst doubts and discouragement, have conferred an enormous benefit upon the town of Dedham will, it is believed, be more and more realized as the comfort and saving attendant upon an inexhaustible supply of water, and the increased value of property here, are more fully brought to the attention of our citizens.”

Facilities constructed that first year included pipelines, the Bridge Street pumping station, 76 fire hydrants, and the Walnut Street standpipe. (This same standpipe was recently determined to be oldest stainless steel standpipe in continuous use in America.) The Treasurer’s Report in 1881 noted a total expenditure of just under $95,000.

ase the company’s property, rights, and privileges at a future time. In 1886, a committee advised against such a purchase. Ten years later, a subcommittee again studied the purchase of the company, concluding that the existing legislation did not “adequately provide the method under which the works may be managed and operated if taken by the Town,” and proposed new legislation. However, the town did not follow through with a purchase.

As far back as 1880, Buckmaster Pond was under discussion as a water supply for the residents of Dedham. A study done at that time stated:

Buckmaster pond is distant by way of Pond and High streets from the Common in the village, 21,000 feet, or 3.92 miles. Between these two points there are ten distinct summits with corresponding depressions, a greater part of which are above the level of the pond…it would be necessary to raise the water at the pond by means of pumping to a height of at least sixty feet…The least possible cost of utilizing this source, exclusive of the cost of the distribution, piping in the village, and land damages at and around the pond, would be $50,000…The cost of raising 200,000 gallons per day sixty feet high by steam-pumping would be very nearly $1500 per year for fuel and attendance. The inadequateness of this source, and the cost of utilizing it, are sufficient reasons for rejecting it without further consideration.

It has been suggested that one of the primary reasons that West Dedham wanted to separate from Dedham in the late 1800’s was because Dedham in
1885 gave the rights to the water in Buckmaster Pond to the town of Norwood. Also, the residents of West Dedham did not feel that they were gaining any benefit from the tax dollars being spent on infrastructure in central Dedham.

In 1930, the Dedham Water Company began supplying some residents in Westwood with water. A separate water company, the Westwood Water Company, was supplying many Islington residents as well. In 1936, the American Water Works & Electric Company acquired the Dedham Water Company. Takeovers by the towns were discussed and proposed in 1939 and again in 1949. In the first case, Dedham defeated the idea in a town referendum and Westwood in a Town Meeting vote. In 1949, Westwood Town Meeting approved the idea, but Dedham voted it down.

Finally, in 1986 both Dedham’s and Westwood’s town meetings voted unanimously to take over the assets of the Dedham Water Company. Because two major production wells were shut down due to chemical contamination in 1979, the Water Company began to plan construction of a seven million dollar treatment plant and requested an 88% rate hike. In the meanwhile, severe water restrictions were placed on residents and Dedham proposed taking over only the portion of the system within Dedham’s boundaries. This move was disallowed by the Supreme Judicial Court. Because the private company was ineligible for state grants, the two towns began to work together resulting in the formation through legislation of the Dedham-Westwood Water District in 1985. Subsequently the treatment plant was completed, the Commonwealth of Massachusetts granted half of the cost of construction to the newly formed District, and water restrictions were removed. The sale, which was financed by a $19.5 million 30-year bond issue, took place on December 17, 1986 and rates went up 20% to finance the purchase and the new treatment plant.

Today, the Dedham-Westwood Water District supplies over 13,000 service connections to approximately 40,000 people through 212 miles of main. On an average day the District pumps about 4.25 million gallons of water from seventeen groundwater wells, six in Westwood and eleven in Dedham. Our newest well at Fowl Meadow came on line in 1997 as the first new source in several decades. Water is treated at two filtration plants for the removal of iron and manganese. In December of 2005, the District was granted membership in the Massachusetts Water Resources Authority, allowing it to purchase supplemental water when needed to ensure public health and safety during peak water use periods. Contractually we can purchase 73 Million Gallons a year from MWRA or 200,000 gallons per day. In 2017 we began construction of an $8 million dollar major upgrade of the Bridge St Treatment Plant, using a 2% loan from the MADEP/Clean Water Trust. We annually make capital improvements replacing water mains, services, meters and fire hydrants as well as pumps, motors, filtration and chemical equipment in an effort to continue providing high quality drinking water service and fire protection to Dedham and Westwood residents and businesses.

There will be a Board of Water Commissioners Special Business Meeting on Thursday June 30, 2022 at 6:30 PM.  This meeting will be virtual only. Please see the agenda page, which is posted when available, for more information including exemptions for executive session and joining instructions.
Learn more
This is default text for notification bar
Learn more